What is The Barcelona Challenge for Good Food and Climate?

Drawing on the C40 Good Food Declaration and the Milan Urban Food Policy Pact, The Barcelona Challenge for Good Food and Climate is a call for cities and their residents to engage in a series of commitments related to the transformation of their food systems in order to tackle the climate emergency.

This Challenge presents metrics to help grasp the positive impacts these commitments could entail in practical terms for the city, population and the climate. In addition, the Challenge provides a platform to showcase the commitment and leadership of cities on the food-climate nexus in the context of the 2021 and 2022 MUFPP Global Forum and the United Nations Climate Change Conferences.

What is The Barcelona Challenge for Good Food and Climate hoping to achieve?

In 2019, 14 global cities signed an ambitious declaration. Good Food Cities: Achieving a Planetary Health Diet for All was launched by C40 aiming to accelerate the transformation of cities’ food-systems in order to tackle the climate emergency. Through this declaration, all signatory cities committed to working towards achieving a Planetary Health Diet for all by 2030, a balanced and nutritious diet culturally, geographically and demographically appropriate. In order to do so, it encouraged measures that would align the cities’ food procurement to the Planetary Health Diet, support an overall increase in the consumption of organic, healthy and plant-based food, reduce food loss and waste by 50%, and develop strategies to implement these commitments, for example by integrating them into the city’s Climate Action Plan. Signing this Declaration was a bold step for many cities around the world as it showed that they understood the imperative of transforming the way we eat in order to tackle the climate emergency. Many cities including Barcelona, Milan, Los Angeles, Seoul and Lima are already implementing successful strategies to achieve the outlined goals.

The year 2021 has become a turning point in which cities have been recognised as key agents in shaping food and climate actions. The UN Food Systems Summit  culminated in September 2021 demonstrating the important role that food systems will play in achieving the SDGs, and has also highlighting the wide range of possible strategies for change (“gamechangers”) that can be put in place by a multitude of actors, including cities. Likewise, recognising both the importance of transforming food systems to tackle the climate emergency and also the role cities can play in this transformation have been critical issues at the COP 26 UN Climate Change Conference held in November 2021 in Glasgow. In this sense, the Glasgow Food and Climate Declaration, officially presented during COP26, represents a unified commitment by subnational governments to put food and farming at the heart of the global response to the climate emergency. The two aforementioned UN Summits have created a promising opportunity to advance political action regarding the food-climate nexus.

Within this context, an alliance of cities, city networks, expert groups and governmental agencies identified a window of opportunity to address the food-climate nexus by relaunching the Good Food Declaration in the context of the 7th MUFPP Global Forum held between 19-21st October in Barcelona: The Barcelona Challenge for Good Food and Climate.

This renewed call to action aims at building on and expanding the urban food commitments that have previously been made, and the processes that are already underway regarding the production, distribution and consumption of sufficient, healthy, just, sustainable, and culturally acceptable food for the entire population and the reduction of food waste. In this sense, The Barcelona Challenge for Good Food and Climate looks to build on the MUFPP by introducing cross-cutting commitments in which special emphasis is placed on climate action. The proposal is built upon the MUFPP’s Framework for Action, as it is the most recognised and used framework for developing local food policies.

The Barcelona Challenge for Good Food and Climate aims to become a tool that can be used all over the world to enable local authorities, in strong collaboration with citizens as key actors, to engage in climate action by compiling, visualising and/or catalysing specific actions that target different areas of the agri-food system. These actions will have an impact on the mitigation of and adaptation to the climate emergency over the 2021-2030 period. It will simultaneously contribute to foregrounding the commitment and leadership of cities on these topics.

Cities committed to The Barcelona Challenge contribute to generate a worldwide community of like-minded cities, national and international city networks, civil society organisations and other key stakeholders that help them strengthen the mitigation and adaptation impact of their food policies, acting as a guidance framework, providing examples of good practice and opportunities for learning exchange and monitoring.

Who is promoting The Barcelona Challenge for Good Food and Climate?

What does The Barcelona Challenge for Good Food and Climate propose?

The Barcelona Challenge for Good Food and Climate addresses two key issues: the mitigation of and adaptation to the climate emergency, through a commitment to transform local agri-food systems to ensure access to sufficient, sustainable, healthy and nutritious diets for all, therefore preventing food vulnerability and enhancing food justice. 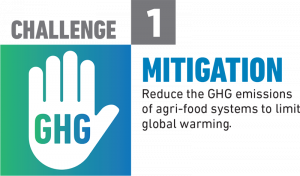 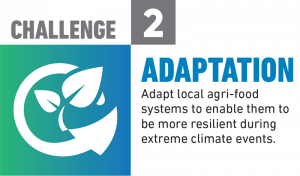 The Barcelona Challenge for Good Food and Climate aims to overcome these challenges by inspiring and supporting specific action under the six action categories of the Milan Urban Food Policy Pact. For each category there is a main focus for the actions to be undertaken. Signatories of the C40 Good Food Cities Declaration will find easy read-across particularly with regards to sustainable diets, nutrition, food waste and social and economic equity.

How can cities join The Barcelona Challenge for Good Food and Climate?

Cities all around the world can join The Barcelona Challenge for Good Food and Climate. To do so, they must record, via The Barcelona Challenge’s Toolkit, the actions they are already developing or are planning to develop by 2030. It is worth noting that each city may have slightly different commitments, based on their different agri-food, political, social and economic contexts, which will be shaping differently their city’s Climate Action Plans. Cities are encouraged to develop at least one action under three of the categories. Examples of actions that can be implemented can be found on the Challenge’s website. It is important to note that this framework can be tailored to local contexts, other actions than those suggested can be included.

Interested cities should go through the toolkit and upload the City’s Official Commitment document with the required information: a summary of the actions they intend to work on, the chosen categories, the timeframe for each action (2021 to 2030) and the department(s) that will be in charge of implementing those actions.

The Barcelona Challenge’s Toolkit allows cities to estimate, record, visualise and download the potential impacts of achieving the Challenge’s commitments. These refer not only to GHG emissions reduction, but also to other social, ecological or economic impacts (e.g. prevented deaths, jobs generated, saved water, etc).

The Barcelona Challenge for Good Food and Climate can receive endorsement from partners and supporters, such as national or international city networks, civil society organisations and other types of organisations, that are not cities but are interested in collaborating and strengthening this process.

2022 is considered another strategic year to catalyse and make visible municipal food policies for climate action. The 8th MUFPP Global Forum, which will take place in Rio de Janeiro (Brazil) from 17th-19th October, will be an ideal platform to present the food policy proposals of cities committed to The Barcelona Challenge. The theme of the event, “From Agenda 21 to Rio+30 Cities: Food Systems at the core of the Sustainable Development Agenda”, is aligned with the Challenge and allows, therefore, to generate spaces to tackle the food and climate nexus from a municipal perspective.

In addition, the COP 27 UN Climate Change Conference to be held in Sharm el-Sheikh (Egypt) from 7th-18th November, will be key in the development of the international strategy for mitigation and adaptation to the climate emergency and The Barcelona Challenge aims to bring its proposal to the discussions.

In 2022, The Barcelona Challenge for Good Food and Climate is developing two actions that will run until the end of the year. The first one involves the monitoring of cities’ commitments through a report, “The Barcelona Challenge, one year after”, that compiles cities´ food policies good practices and that will be presented at the 8th MUFPP Global Forum. The second action consists in developing a program of learning exchange for council technicians and elected officials between cities addressing climate change through sustainable and healthy food policies: the P2P Exchange international meetings. Partners and supporters of The Barcelona Challenge are encouraged to reinforce this program.

We use cookies on our website to give you the most relevant experience by remembering your preferences and repeat visits. By clicking “Accept All”, you consent to the use of ALL the cookies. However, you may visit "Cookie Settings" to provide a controlled consent.
Cookie SettingsAccept All
Manage consent

Necessary Always Enabled
Necessary cookies are absolutely essential for the website to function properly. These cookies ensure basic functionalities and security features of the website, anonymously.
Functional
Functional cookies help to perform certain functionalities like sharing the content of the website on social media platforms, collect feedbacks, and other third-party features.
Performance
Performance cookies are used to understand and analyze the key performance indexes of the website which helps in delivering a better user experience for the visitors.
Analytics
Analytical cookies are used to understand how visitors interact with the website. These cookies help provide information on metrics the number of visitors, bounce rate, traffic source, etc.
Advertisement
Advertisement cookies are used to provide visitors with relevant ads and marketing campaigns. These cookies track visitors across websites and collect information to provide customized ads.
Others
Other uncategorized cookies are those that are being analyzed and have not been classified into a category as yet.
SAVE & ACCEPT